The Energy Community Secretariat’s Report published today reveals that the Energy Community Contracting Parties have made progress in reforming their energy and climate sectors. In fact, the average implementation score increased from 53% to 56% in the reporting period. However, the overall pace of reform slows down. It was only half that of the previous reporting period.

All Contracting Parties slightly increased their overall implementation score except for Montenegro, whose otherwise strong track record was impacted by the non-compliance of the thermal power plant Pljevlja with pollution standards, and the lack of secondary legislation on renewables auctions. Montenegro is still the top performer, followed by Serbia and Ukraine in joint second position. North Macedonia closely follows to take third.

Serbia, whose progress previously plateaued, has made headway by upgrading its legal framework in the climate, energy efficiency, electricity and renewables sectors but its track record continues to be weighed down by its failure to unbundle all of its transmission system operators as required by the Third Energy Package. Ukraine, one of the biggest movers during the last reporting period, failed to maintain the reform momentum, with only limited progress in the electricity and gas regulatory framework.

In the middle of the pack, Albania made modest progress, followed by Kosovo* where improvements were nominal. In the lower tier, Georgia, the newest Contracting Party, had the biggest gains of all Contracting Parties, catching up fast in all three key areas – electricity, gas and sustainability, while Moldova and Bosnia and Herzegovina had more modest gains. 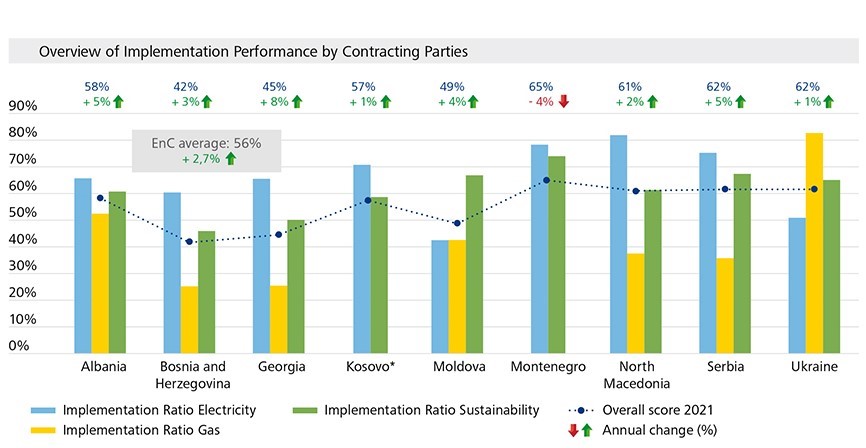 Director Janez Kopač said: “Despite the ongoing challenges posed by the pandemic, there is no doubt that the Contracting Parties are working on the actions outlined in the European Green Deal. An increasing number of Contracting Parties have formally or implicitly accepted that coal and lignite have no future in their energy mix. Their reform paths will be aided by the upcoming Energy Community Ministerial Council, which is expected to adopt the decarbonisation roadmap for the Energy Community, incorporate key elements of the Clean Energy Package and prepare for the adoption of meaningful 2030 targets.”

The report shows that regional power market integration remains one of the biggest challenges in the Energy Community. The gap in the implementation of the European legislative package on capacity allocation, balancing and system operation remains high on the priority list. Deputy Director Buschle said: “Without the further integration of their power sectors, the domestic markets which are all of small scale, with the exception of Ukraine, will remain sub-optimal and unable to facilitate the transition towards a decarbonized and decentralized electricity sector. The region must prepare for the large scale deployment of variable renewable energy sources.”

“Moreover, with the current energy crisis, we have already witnessed that small isolated markets are more prone to price volatility and that their integration at regional and pan-European level has never been more pertinent. For example, Serbia saw the highest electricity prices in Europe recorded on the day-ahead market for several days,” he added.

Once again, the report shows that all Contracting Parties which have coal in their energy mix are struggling to comply with the emission ceilings established under their National Emission Reduction Plans (NERPs) for at least one of the three pollutants (nitrogen oxides, sulphur dioxide and dust) covered by the Large Combustion Plants Directive. “It is worrying to see that all Contracting Parties subject to the NERP continue to emit over the legal limit set by the Large Combustion Plants Directive, with the exception of Ukraine. This is of real concern to the health and wellbeing of citizens,” commented Deputy Director Dirk Buschle.

* This designation is without prejudice to positions on status, and is in line with UNSCR 1244 and the ICJ Opinion on the Kosovo declaration of independence.